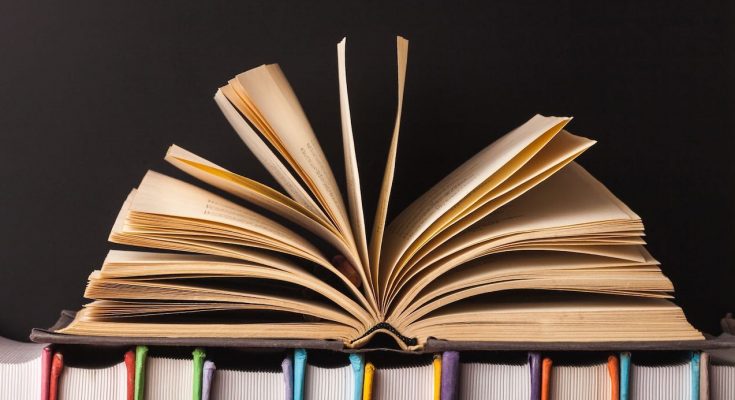 As the new decade begins, The Mint asked a quintet of our 2019 #NotTheNobel Finalists to name their book of the past decade and to tell us why it wins their nomination.

While experts in their field are a sound source of opinion on books covering their area of study, choosing one book from the countless number of texts must be a tough one for each of them. In a decade made hugely significant by emerging from the financial crisis there was any number of books seeking to address the fundamental questions that were scattered by the failure of 2008. Our reviewers are well equipped for the challenge:

Professor of Community Justice and Social Economic Development in the Department of Africana Studies at John Jay College, Jessica Gordon-Nembhard. 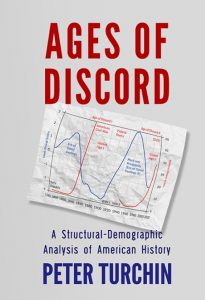 Ages of Discord:
A Structural-Demographic Analysis of American History

Peter Turchin’s work to develop a dynamic theory of social change, which he calls ‘Cliodynamics’ is the most promising development I’ve seen in the broad field of social science. I have been attempting to develop genuine dynamic analysis in economics for decades now, but the fetish the Neoclassical mainstream has for equilibrium modelling means that, bar a complete Kuhnian revolution, equilibrium-oriented methods will continue their dominance.

That Kuhnian revolution might well come from history. As historian of science, Thomas Kuhn, observed, scientific revolutions often begin outside a discipline dominated by a failed paradigm, because the hold of that paradigm is so great that the pre-conditions needed for a new approach to blossom do not exist. That is certainly the case in economics, where non-orthodox thinkers are excluded from the leading academic institutions and forced to subsist in academic backwaters with excessive workloads and trivial levels of research funding.

No such entrenched dominance of equilibrium methods exists in history, and in fact the resistance Turchin faces is resistance to mathematical practices in general, in a discipline which still sees its subject as “one damned thing after another”, as Arnold Toynbee once observed. Turchin, on page 6, insists instead that the overall stability of pre-industrial societies follows a “regular, albeit dynamically complex, pattern involving at least two cycles superimposed on each other (plus exogenous stochasticity on top of that)”.

Applying the same dynamic-systems perspective to modern Western society, he finds that the forces pushing for social breakdown are so dominant today that it deserves to be called the Age of Discord II—with the Age of Discord I culminating in the American Civil War.

Since his frequency of interest is completely outside the purview of Neoclassical economists—who are incapable of imagining that society has been anything other than capitalist, let alone considering that capitalism itself might collapse—Turchin is safe to develop his methodology away from their attacks. His work could be the seed from which decent complex systems dynamical analysis of society finally develops in the social sciences.

Development Drowned and Reborn: The Blues and Bourbon Restorations in Post-Katrina New Orleans 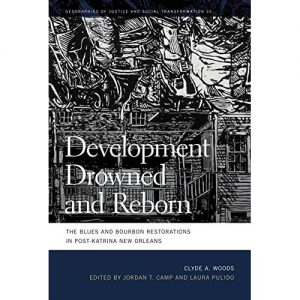 In Development Drowned and Reborn, Woods et al cover the multicultural history of colonialism and resistance in early Louisiana to the present, and how that has impacted the kind of city New Orleans is, and its ability to recover from Hurricane Katrina. They provide a unique analysis of the early common agenda between Native Americans/First Nations and Africans in America: oppose slavery, racism, and monopoly; and the shared multiple strategies for resistance, cultural preservation and “intellectual mobilisation to build continental-scale multi-ethnic alliances” (page 2). Both groups “supported the realisation of social justice and sustainable human community and cultural development” (page 2) in myriad ways – and continue to do so.

In addition, Woods connects the need and struggle for working class democracy with the democratic principles in Black cultural production. He argues for cultural and economic sustainability based on indigenous knowledge and democratic participation. ‘This Blues epistemology’ (as Woods calls it), he explains more in his 1998 book Development Arrested. The Blues reflect the “origins, varieties and consequences of life lived,” from the perspective of African Americans “dedicated to the preservation of their humanity” (1998, page 216). It’s a form of cultural resistance in a brutal, oppressive, and racist society.  This privileges indigenous knowledge and organic intellectuals, and denies power to elites. The Blues vision is a “dialectically polyrhythmic, democracy where both cooperation and individual expression thrive” (1998, page 216).

Both books highlight how African Americans have struggled to attain this vision in the Delta Region of the US South, especially in New Orleans, over centuries.  And provide hope that African Americans can continue to survive and resist by engaging in democratic collective economic action.

Why was Development Drowned and Reborn so important for the past decade and important for the coming decade? Woods’ research is a crowning example of how important it is to learn from the past, especially to delve deep into that past to resurrect a more detailed past about multicultural resistance and collective action toward social and economic justice. We need to understand the past in that way because 21st century forces are still trying to divide us and pit indigenous peoples against people of African descent, and long-time residents against new immigrants, etc.  This book shows us that all oppressed people have similar struggles and strategies for liberation that are still with us and relevant today.

The book is also important because New Orleans and the Gulf Coast have spent more than a decade trying to recover from the manmade and policy disasters that Hurricane Katrina exposed.  It shows that adhering to the principles and strategies of economic democracy and community-controlled development highlighted in the book are the best ways to achieve sustainable recovery.

This lesson is going to continue to be important as climate change creates stronger and stronger hurricanes and more and more low-lying areas populated by marginalised people will be vulnerable to flooding and destruction. We have to challenge environmental racism along with global warming, and connect solutions to the proven strategies of grassroots economic organising and democratic collective action.

Keynes: The Return Of The Master. Public Affairs 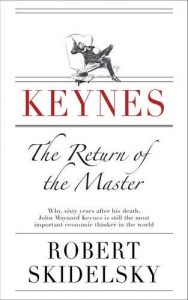 I chose Lord Skidelsky’s book, published just over a decade ago, because it was both prescient and premature. It was prescient because it recognised so early into the Global Financial Crisis that mainstream economics was suddenly and indisputably dangerously irrelevant. As the Queen had rightly objected, none of the mainstreamers had seen the crisis coming, and Skidelsky lays out why they could not possibly have done so.

He was, however, premature in announcing the return of the master, J.M. Keynes — as the following decade has made clear, and even as many of us had wished it to be so. Unfortunately, the cold, dead hands of Zombie Economics — perhaps best represented by Greg Mankiw today (who has presented an utterly nonsensical critique of Modern Monetary Theory at the latest manifestation of the Allied Social Science Association’s ASSA’s bread and circus fest in San Diego) still dominates economics instruction.

Skidelsky has continued to make major contributions over the past decade, both in his scholarly work and through projects at the so-called Institution for New Economic Thinking (which, unfortunately, is dominated by the Old Zombie way of thinking and mostly promotes texts that deviate only slightly from Mankiw). But a concern of this book — with continued development in his later books – is Keynes’s ethics, morals, and early beliefs.

According to Keynes, “To make the world ethically better was the only justifiable purpose of economic striving.” (page 133) The goal is not to maximise pleasure, but rather goodness; this is easier to do once individuals “have a certain level of material comfort”(page 139). The barrier is the “love of money” because it is morally inefficient – the objectless pursuit of wealth – and economically inefficient as the psychology of the miser depresses demand (page 142).

The conflict for the moral philosopher is that the love of money drives capitalism, which helps to provide the required material comfort necessary to live “wisely, agreeably, and well,” (page 144) but it is also a neurosis because there can never be a point of satiation (page 153). The relevance of Skidelsky’s book has only increased as we, collectively, have come to realise that humankind has just a dozen years left to chart a new course or face certain annihilation. 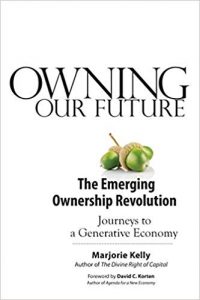 The book of the last decade that has most influenced my work has to be Marjorie Kelly’s. I read it while researching and writing Doughnut Economics and it profoundly influenced my thinking about the design of organisations of all kinds – from corporations and governments to cooperatives and community groups.

This deceptively simple framework has since become core to my work, especially with businesses. While firms are typically eager to explore whether the design of their products is compatible with getting into the Doughnut, I quickly point out that what matters most is the design of the business itself – its purpose, membership, governance, finance and networks – because these design traits will either trap the business in extractive mode or enable it to be part of a regenerative future. The conversations that follow are tough and confronting because they go to the heart of the structure of economic power. As Kelly says: “Ownership structures – property and who holds it – are at the foundation of every economy. So if we want a different economy, we have to get the assets in different hands”.

The Spirit Level: Why Equality is Better for Everyone 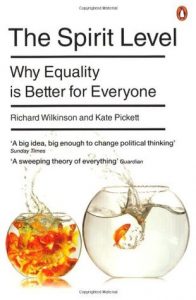 The Spirit Level was published at the dawn of the past decade and put inequality squarely on the map.

By 2010, in the UK alone, it had been referenced in big speeches by the leaders of both major political parties and 75 MPs signed the “Equality Pledge”. And this all happened four years before Picketty’s Capital in the 21st Century.

The Spirit Level’s argument is deceptively simple: The more equal a society, the better its social outcomes in term of, for example, levels of trust, educational achievement, crime, suicide, mental illness and even consumerism.

So far so intuitive. The eye-opener is that the better outcomes are driven not only by improvements for the worse off, but those at the top benefit from a more equal society too. It powerfully demonstrates the systems’ principle that for the whole system to be health, every part of the system needs to be healthy.

Since the Spirit Level’s publication, inequality has been a part of mainstream political, social and even business dictionaries. Its simple message planted a powerful seed ten years ago. Over the next ten years, we must put its lessons into action.

Pickett, K and R Wilkinson (2010) The Spirit Level: Why Equality is Better for Everyone, Penguin Books.

Kate Raworth is an economist whose research focuses on the unique social and ecological challenges of the twenty-first century. She teaches at Oxford University’s Environmental Change Institute, where she is …

Tom Rippin (born c. 1975-76) is a social entrepreneur, founder and CEO of On Purpose, a company that develops leaders who aim to create an economy that works for all. …