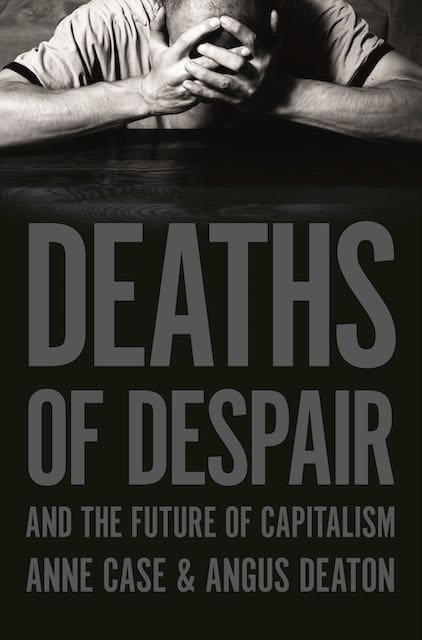 Researchers have charted the US phenomenon where, as globalisation spreads injustice, the despondent reach for the gun. Review by John Komlos

It is a commonplace that the demographic development of a society is a crucial element in its stability and sustainability. Simply put, a decline in life expectancy or a rise in mortality does not bode well. So, when a series of studies began to appear in the mid-seventies on the health problems in the Soviet Union that included most notably complications due to a rampant alcoholism, we in the West took that to be a serious indication not only of the general inferiority of its system but also of an impending political crisis.

Yet, our sense of superiority did not last all too long. Soon after the demise of the USSR signs of rising suicide, opioid overdose deaths, and alcoholism reared its ugly head among the Cold War victors as well and did it doggedly. A major difference was that Americans had access to more than alcohol, including guns and opioids, so that they used other means as well to ease the pain of modern life. Princeton economists, Anne Case and Angus Deaton, have been at the forefront of shedding light on this dystopian phenomenon they dubbed “deaths of despair”.

This is strictly an American trend in the 21st century, where an individualistic dominant ideology brought about a lax safety net that left too many people depressed and without a lifeline to grasp onto but were left to drift on their own resources. And hyperglobalisation left millions of people feeling left behind and alienated, with nowhere to turn.

That brings us to the obvious discrepancy between the allegedly strong, full-employment US economy, a hype propagated by mainstream economists, politicians, and pundits on the one hand, and the many signs of anguish among the low-skilled members of the labour force on the other. Life Expectancy in the US in 2018 was back at the level of 2010 in spite of medical advances (Figure 1). This is three years below those of other rich countries with a combined population of 670 million. The US life expectancy is near the level of Cuba and Costa Rica whose average incomes are miniscule compared to that of the US.

It might surprise some readers that Blacks and Hispanics were immune to the bug that inflicted the deaths of despair. But there should be no surprise because minorities were always at the bottom of the totem pole and therefore did not experience downward social mobility as did whites without a college education. After all, there is hardly anything worse for self-esteem than loss of social status and social isolation (page 100).

“Deaths due to suicide, opioid overdose, and alcohol-induced causes brings the total number of deaths of despair north of 150,000 a year and rising.”

Case and Deaton’s story is that of the shocking and unprecedented increase in mortality of the less-educated whites, who found themselves relegated to the lower echelons of society by hyperglobalisation, technological change, and government policy of “pampering” the superrich, as Warren Buffett put it. Deaths due to suicide, opioid overdose, and alcohol-induced causes brings the total number of deaths of despair north of 150,000 a year and rising.

This means that more people die of self-inflicted wounds annually than the number of soldiers who perished in Korea and Vietnam altogether and the cumulative total in the 21st century “is greater than the total number of Americans who died in the two world wars” (page 113). It would be hard to imagine such a devastating development in a decent economy that was truly at full employment. In short, Case and Deaton describe the heartbeat of an economy that has morphed into a dual labour market like those in developing countries.

This is the essence of the inferences drawn by Case and Deaton. They note that working class whites, especially those of middle age, experienced low and decreasing wages, increasing debt, downward social mobility, declining relative incomes, and the hopelessness accompanying these phenomena while the top 1% of the income distribution was experiencing a boom reminiscent of the Robber Barons at the turn of the 20th century. This became nothing less than a Durkheimian recipe for widespread anomie or alienation (pages 67, 94, 101, 102, 270).

To be sure, money was not the only factor. The social position of the less educated worsened also “because less educated men are less marriageable, the problems in the labour market are not only making them worse off materially but also depriving them of all the benefits that marriage brings…” (page 169).

The benefits included a two-income household that was a sort of insurance policy: if one member of the household was unemployed the other could still provide at least for the basic necessities of life. But there were other benefits to marriage as well: “married people live longer, are healthier, and are more satisfied with their lives, especially married men” (page 169).

But when these traditional social structures of support dissolved for working class whites there was nothing to take their place. The family was gone, the unions were gone, neighbourly love was gone, the churches were no longer relevant, and the government looked the other way and the gig economy did not offer enough income to be successful in the marriage market. For these folks there was nothing to grasp onto except a bottle, the trigger of a gun, or a hypodermic needle.

For instance, in 1993 drug overdose deaths among white 50-54-year-olds was merely 2 per 100,000 regardless of education. However, by 2016, 45 more people without a degree died from overdose than those with a degree. This is an immense increase and the pattern is almost the same for the other forms of deaths of despair and their trends were all upward by the 1990s. These findings dovetail well with the contention that the accumulation of anxiety led to the election of Donald Trump in 2016 and that the process began in the 1980s with the manifold impact of Reaganomics.

It is not only inequality that drives the process but the perception that the economy allocates rewards unfairly—very unfairly. Alan Greenspan, no progressive he, nonetheless recognised that with this level of inequality the “system will not stand”. But he did not imagine that the despair would deteriorate until at least 150,000 people a year would strike back at the system the only way they knew how: by committing suicide. With Piketty’s work on inequality, Case and Deaton deal a double whammy to the reputation of the hyperglobalised Capitalism of the 21st century.

Lectures by Case and Deaton are also available here.