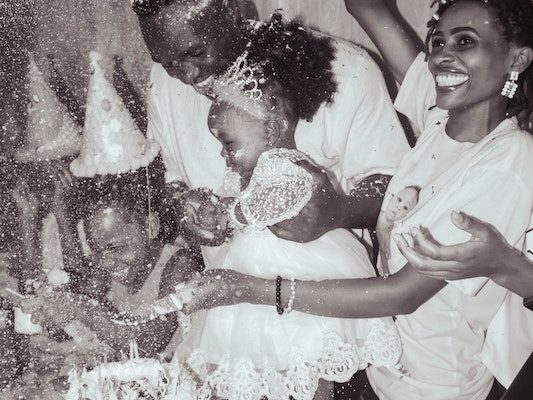 South Africa’s rulers are so detached from their electorate they don’t even let them eat cake. Lebohang Liepollo Pheko explains.

Every year on the weekend closest to January 8th, the African National Congress (ANC) gathers to commemorate its formation on that date in 1912. The commemoration has evolved into a carnival-like political pilgrimage to branded black, green and yellow stadiums for the party faithful.

A feature of these festivities is the ritualistic cake cutting.

At some point towards the end of the day, after speeches peppered with hollow promises and contrition for things that have not gone to plan, in the sweltering South African summer that January brings, a huge cake emerges.

On the shaded stage the ANC party higher-ups cut the cake and distribute it generously – but only among themselves. Smiling joyfully, the leadership slice the cake, pause for cameras and pass pieces in full view of thousands of ANC members who are largely unwaged workers who borrow and save to find means to travel to the annual political party pilgrimage.

Shored up by diminishing electoral participation, the nation’s leaders keep to a neo-liberal menu that does not trickle-down any cake crumbs.

The sight of the party elite eating lavishly while the nation’s poor look on makes painful viewing. Not so much “let them eat cake” but rather “let’s have our cake  and eat it – while you starve and dehydrate a safe distance away”.

The event speaks to the deep disconnect between the government and the people. With ongoing insensitivity and a Teflon resistance to criticism, shored up by diminishing electoral participation, the nation’s leaders keep to a neo-liberal menu that does not trickle down any cake crumbs.

During the Covid pandemic there was a new impetus to present a semblance of sharing. South Africa declared a national state of disaster on 15 March 2021 and swiftly moved into action mode including a national lockdown, curfews for all except essential services, mandatory masks in public and a disturbing increase of visible policing.

Covid relief
South Africa was under one of the world’s strictest Covid lockdowns which included a ban on alcohol and cigarette sales. And the economic impact of the pandemic for the socio-economically marginalised masses was devastating. Their distress was borne out by social researchers and impact analysts who predicted that the extreme poverty rate among vulnerable households had tripled. The social assistance measures announced by the government still left about 45% of South African workers without relief and the Labour Quarterly surveys found that close to three million people – around 18% of total employment – were working in the informal/parallel sector. The government has provided some relief. The authorities allocated ZAR 30bn ($1.6 bn) to a special National Disaster Benefit Fund and set up a Solidarity Fund to pool funds from government, businesses, and private individuals. The government is currently implementing a Covid–19 pandemic stimulus package of ZAR 500bn ($26.3 bn) equivalent to 10% of GDP, distributed as a loan guarantee scheme (40%); job protection and worker income (28%), tax relief (14%); social grants (1%); COVID–19 health-related services (4%), and municipality emergency services (4%). On 5 May 2020, the National Treasury Strategy 2020–2025 presented plans for the first time to mobilise $10bn from multilateral development banks to support the economy.

At the height of the pandemic, mounting anger manifested in two weeks of protests in July 2021 primarily across the South African provinces of Kwa-Zulu and Gauteng. Ostensibly those uprisings were catalysed by President Zuma’s arrest. But they could have been sparked by anything after years of benign neglect and abandoned liberatory agenda setting and they followed a history of service delivery protests.

Service delivery protests
Like Egypt and Tunisia during the Arab Spring, discontent in South Africa has paved the way to incendiary social uprising. And while protest in South Africa has a long history – it formed an important vehicle during the fight against colonial apartheid – its rebirth and propulsion to the centre of the struggles in the post-apartheid years have come as a surprise to many. Most of these protests – so-called service delivery protests – are reported as emanating from communities’ dissatisfaction with municipal service-delivery as well as problems relating to lack of communication between council and councillors and citizens. The ANC-led South African government has been experiencing turbulence from many protests that are worsening at the municipal level where service delivery issues are paramount. An increase in service delivery protests has been correlated with the dual pressures of recession and rising unemployment. Unemployed people have particularly criticised the way tenders and jobs are allocated. While citizens may have valid reasons to embark on the service delivery protests, they have been portrayed as having a negative impact on government programmes, businesses, investor confidence and jobs. So the protests might be regarded as a self-defeating strategy to those areas that are more susceptible to them, mostly urban municipalities.

Partly in response to the state of emergency, the government created a special grant of R350 a month (about $18).  Naming the handout as the Covid-19 Social Relief of Distress grant made it clear that this was a temporary measure, here only to relieve the distress of Covid-19 and not to tackle the long standing government neglect of South Africa’s poorest. Nevertheless, with economic distress established as the norm for huge proportions of the population before the coronavirus outbreak, there were calls to retain the grant as a permanent component of the State’s social contract.

The pandemic only amplified the deep economic crisis which ate into the “informal” or parallel economy that is often the only income source for many households. The lockdown, however, excluded informal food vendors as essential services despite the fact that some 70% of households in townships usually get their food from those vendors. The Covid crisis and long-running deprivation only exacerbated the vendors’ precarious situation and further restricted access to affordable food in African townships.

By the time of the protests that took place across South Africa in July 2021 it was clear that cake crumbs were just not enough.

Government anxiety that people will become agitated when the grants are taken away is palpable.

Government resistance and ambivalence towards extending broad social protection remains. While South Africa’s treasury has made it clear that new direct cash transfers are exceptional and temporary, nearly two years later – largely through strong social and policy activism – the grants remain in place; so does the threat of  withdrawal.

But government anxiety that people will become agitated when the grants are taken away is palpable. Finance minister, Enoch Gondogwana, has maintained the government line of scarcity and made heavily criticised trade-offs between social protection and austerity.

Clearly these are the signs of embattled neo-liberalism on the wane. South Africa’s people are making serious attempts at forcing change after years of neglect by politicians, media, and the general public.

In the midst of “cakeism”, how does this come as a surprise?