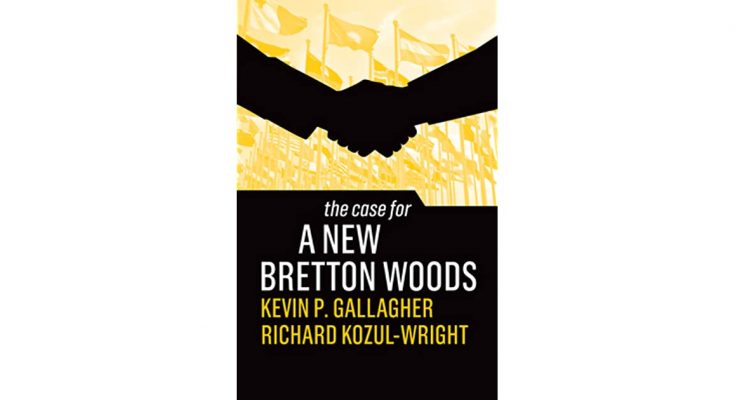 The authors provide a step-by-step guide to the main overarching structural changes that are needed to better address climate change and enable a more economically-just and financially-stable world.  Review by Rick Rowden.

Gallagher and Kozul-Wright highlight the key policies, rules and institutions currently governing the global economy that are in need of repair. And the book offers these prescriptions in readable, bite-sized pieces that are easy to understand. In other words, you don’t need to have a PhD in economics or to have been a currency trader in emerging markets to read it.

The book has been written as a 21st century guide book for anyone who is concerned with addressing climate change and economic justice at the global level. The authors look to the dysfunction of our current set of rules and institutions that run the global economy. They point to the deepening climate crisis, worsening economic inequality, and growing fragility of the global finance system and argue that the time is right for a radical overhaul of the global economic system. In this regard, they look back to another critical inflection point in the history of international economics, when world leaders gathered in Bretton Woods, New Hampshire in 1944 to rebuild a global economy that had been destroyed by the great depression of the 1930s and second world war.

The Bretton Woods conference led to the establishment of the World Bank and the International Monetary Fund (IMF) and rebuilt a new international economic system. The new organisations and rules were based on the widespread use of fixed exchange rates and regulated trade and finance and  prioritised employment, economic stability, and gross domestic product growth.

This new system worked well for a few decades in terms of providing public goods such as greater employment, improved stability, and higher growth. But it began to adopt several important free market and liberalisation reforms in the 1980s which abandoned the commitment to the goals of employment, stability and growth. Instead it prioritised the mobility of capital and allowed for the build up of private debt. In direct contrast to the earlier goals, these post-1980s changes have increased financial instability while weakening prospects for employment and growth. Expanded financial markets have created a vast global casino that allows investors to seek high returns on short-term speculative bets rather than investing in real companies over the long-term. The changes also curtailed the domestic “policy space” available to developing countries to pursue broad-based national economic development strategies.

Therefore, today’s system, which has been built to promote financialisation, is not capable of effectively addressing growing challenges for public policy posed by the climate crisis, worsening economic inequality, or the heavy indebtedness in developing economies.

Therefore, today’s system, which has been built to promote financialisation, is not capable of effectively addressing growing challenges for public policy posed by the climate crisis, worsening economic inequality, or the heavy indebtedness in developing economies. Given this wrong turn the global economy has taken with financialisation in recent decades, Gallagher and Kozul-Wright make the case that the time is right for the global community to get together for another Bretton Woods moment. They propose this to create international agreement on the need to take collective action to rebuild the global economy once again, this time to address our 21st century challenges.

The authors lay out new principles and policy reforms that are needed for a Bretton Woods-sized overhaul. This gets us back to the earlier post-war priorities of higher employment, economic stability and economic growth – but with green growth within ecological boundaries. They specifically point to new institutions and policies to re-regulate finance, promote increased employment, economic stability, finance the green energy transition, and reduce economic inequality and the indebtedness of developing economies.

The authors are not necessarily calling for existing institutions, such as the IMF or the World Trade Organization, to be torn down in favour of new ones. Instead, they argue, what is really needed is a renewed awareness of the role of public institutions and the public goods they provide, such as greater employment, improved stability, and higher growth. The authors also point to the importance of common goals at the international level and agreement on new principles that can guide more effective multilateral cooperation.

The most important new goal is to get the climate change imperatives of the Paris Agreement on carbon emissions-reduction mainstreamed and hardwired into all of the major regional and global economic institutions. This means increasing the coordination for joint-financing by the world’s various regional multilateral development banks and national public development banks and getting these adequately recapitalised (getting rich countries to put more money in according to their international commitments). Such an effort should also include more coordinated and pro-active roles for newer public institutions such as sovereign wealth funds. Then there is the need to get all on the same page rowing in the same direction so that financing the energy transition around the world can be more effectively supported.

To raise financing for the green energy transition across the world meaningfully will require abandoning the prevailing assumption that such development finance should primarily come from private capital markets. Instead, there is a need to reestablish the pre-1980s understanding about the efficacy of public investment through public institutions.

The co-authors call for plausible reforms of the rules and international institutions that are needed to rebuild a better international monetary and financial system. They call for realigning the international trade and investment regimes.  They also identify a few key principles that should guide such reforms. Among these is the idea that the rules governing international institutions should not infringe on the scope of states’ domestic policy space to pursue national economic development strategies. Global public institutions should also be accountable to their full membership, inclusive of diverse viewpoints, and have balanced dispute resolution systems. They also call for countries to re-regulate their financial sectors in ways that would steer private capital away from speculative investments and into productive economic activities and better support green energy transitions.

The book is intended to serve as a basic roadmap for those who are serious about participating in a meaningful public dialogue about how to fix the global economy.

There should also be much better coordination and collaboration among the world’s central banks to build a “global financial safety net” of emergency financing and bilateral swap lines between central banks to help countries prevent future financial crises. And a new international institution should finally be established to provide a forum where orderly sovereign debt restructuring agreements can be reached between creditors and countries facing insolvency crises.

The book is intended to serve as a basic roadmap for those who are serious about participating in a meaningful public dialogue about how to fix the global economy. The authors hope that the changes they propose can serve as a starting point for long-overdue international discussions on the necessary reforms. They note that the current head of the IMF, Kristalina Georgieva, has looked at the intersectional economic, environmental and health crises facing the world today and called for “a new Bretton Woods moment”. On this point, they think she is absolutely right.

The co-authors look to new coalitions that have emerged across the US, Europe and many other parts of the world that are demanding leaders take steps to address worsening economic inequality and climate change – even before the Covid crisis inspired leaders to promise to “build back better.” In fact, many of the proposed policy solutions for these issues are increasingly linked together, with politicians promising green economic recoveries. The task ahead, according to the co-authors, is to take this growing political momentum up to the next level, where it can inform the discussions on necessary structural reforms to the global economy.

For readers deeply concerned about addressing climate change and fighting for economic justice at the global level, this book is for you.