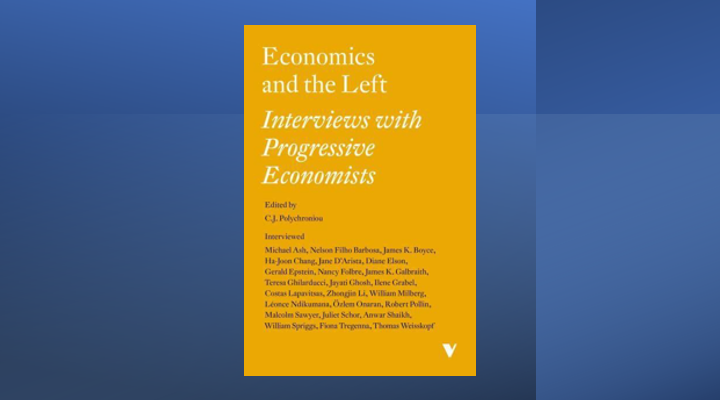 Review by Guy Dauncey of Economics and the Left: Interviews with Progressive Economists, edited by  C.J. Polychroniou (2021).

As we begin 2022, way too many people are looking at the climate crisis, the pandemic, the housing crisis, the possible collapse of democracy in America, and now the invasion of Ukraine, and they are thinking: “This is a mess.” If their homes or businesses have been destroyed by flood or fire, or if they are on the wrong side of the housing crisis, it’s more than a mess. If they have understood why the world’s climate scientists are so alarmed, they are thinking “OMG. Why won’t anyone look up?”

And this is only part of it. If central banks raise interest rates in a bid to lower inflation they may trigger a wave of business failures, evictions and bankruptcies that could result in a financial crisis as bad as the 1930s. That would be catnip to the populist shit-stirrers and their scary schemes.

Knowing how much trouble we are in, I had hoped that Economics and the Left: Interviews with Progressive Economists, published in September 2021, would offer valuable insights and constructive solutions. It’s a fascinating book. The view it offers into the lives and work of the 24 economists it features is heart-warming. These are people who truly care, who have chosen to express their caring through the realm of economics. Their interviewer C.J. Polychroniou understands their work. If you are into economics but have no patience for neo-classical nonsense, it’s a great read, and the economists interviewed offer many thought-provoking insights (see box).

Not the party line

“Undergraduate economics is generally excruciatingly boring and divorced from understanding any real economic issues.” (…) “I did my PhD at Cambridge. The few remaining heterodox economists were pretty much marginalized by the time I got there, and there was a strong emphasis on quantitative modelling.”

“Neoliberal economics is based on a simplistic theoretical framework that relies on completely unrealistic assumptions that are pretty much universally recognized to be completely inapplicable in real economies: perfect competition, full employment, symmetric information in all markets, and so on.”

“Through my engagement with these ‘real world’ people (in governments, corporations, unions and NGOs) I have learned how deficient the academic economists’ knowledge is of how the economy works.”

“Any discipline that is guided by an ideology is not a ‘real’ science’.”

“I recall approaching (Robert Heilbroner) after class one night and asking if he really believed, as he had stated in the lecture, that Samuelson’s text was deeply ideological.”

“Capitalism is driven by profitability at the cellular level (…) the depredation of the Earth comes from the intrinsic drive of capitalism (…) whether or not outcomes are profitable, not whether they are socially desirable or undesirable.”

“I would describe neoliberalism as corporate-dominated capitalism expanded from a national to an international scale.” (Thomas Weisskopf)

“The state always operates within the limits of the resistance of the rich.”

“It is fairly obvious that global capitalism is in dire straits. (…) But at the same time, it is also true that those hoping and mobilizing for bringing in an alternative system are everywhere scattered, weak, and demoralized.”

“Global financial governance, taken as a whole, is ‘incoherent’. An unruly muscular pragmatism has broken out in institutional design, governance, and policy-making.”

“Controlling private finance – or banishing it altogether if it refuses to play by the rules – is probably the single most important  political economic intervention for building an egalitarian democracy in the rest of the 21st century.”

“A green approach that emphasises environmental sustainability needs to be a far greater priority than it has traditionally been in most Marxist thought and broader left perspectives.”

“I think we should start at the municipal level to revive democracy, provide public goods, and build common security.” … “This kind of solidaristic, community sharing is making more headway in Europe than in the US.”

“Because of the extent to which the powerful class of neoliberal corporate and government leaders have succeeded in maintaining and expanding their power in recent decades, a crisis sufficient to bring (it) down will have to be exceptionally deep – at least as deep as (…) the 1930s.”

Having enjoyed the feast that the interviews offer, I ponder them as a body of work. Most reference Marx, Keynes, inequality, poverty, wages, labour, and the harms caused by neoliberalism. So far so good – if this was the 1980s. But it’s not. Only three (Robert Pollin, Juliet Schor and James Boyce) think the climate crisis is worth writing about, although several acknowledge that they ought to. Only two write about a Green New Deal. Not one thinks the biodiversity crisis is worth a mention. Another pair are alone in making any reference to Modern Monetary Theory, one of whom is sceptical. Just two write about central banks. Not one makes any reference to the housing crisis that is tearing such holes in people’s lives. And only two (Juliet Schor and Robert Pollin) reference limits to growth, or the degrowth movement. Schor, at least, seems aware of the upsurge of grassroots economic initiatives that is generating excitement around the world.

This is troubling because it suggests that most of these progressive economists may not be focused on today’s realities.

It suggests that most of these progressive economists may not be focused on today’s realities.

Their work is great, I admire it, and it’s 1000% better than anything you’d get from neoclassical economists, but it’s not enough. There are seven realms where an absence of attention causes me concern.

The first is the realm of nature, including the climate and biodiversity emergencies, and the glaring contradiction between continued economic growth and the urgent need, laid out by Johan Rockström, to withdraw the economy to a safe place that does not breach Earth’s resilience boundaries. If we lose in this existential race to turn things around, our tombstone may read “Human civilisation: killed by economists.” Every model that does not begin and end with nature needs to go back to the modelling shop.

The second is the realm of money, including Modern Monetary Theory, the crash-threatening accumulation of private debt, and the question on whose behalf should central banks create money, and for what purpose? Should it be to bail out the bankers and inflate the Dow Jones, or to serve the needs of the public by injecting money directly into the economy to build affordable housing, tackle the climate crisis, and write down private debt? With interest rates close to zero, how should central banks respond if we wake up one morning to a new financial collapse? Economists like Michael Hudson and Stephanie Kelton are discussing this, but seemingly no-one in this book is.

The third realm is housing, which earns not so much as a glance. If housing is thought to be just another commodity, like sugar or steel, so much the worse for economics. The reality is that housing is being treated as a very profitable speculative commodity by those who are already wealthy, using cheap money created by banks and central banks to drive prices into the realm of the ridiculous: an average two-bedroom house in Vancouver sells for $2m. Governments, meanwhile, supported by neoclassical economic policy-makers, have ceased to engage in the building of non-market housing. The result is financial misery and debt for millions, followed by evictions and homelessness.

The reality is that housing is being treated as a very profitable speculative commodity by those who are already wealthy.

Fourth is the realm of solidarity economics and community economic regeneration. This area is full of innovation, from community banks and cooperative businesses to an entire regional cooperative economy in the Emilia-Romagna region of Italy. Only Schor shows any awareness that the realm exists.

Monopolies and oligopolies make up the fifth realm. These emerge like cancers when the rule-keepers allow companies to accumulate excessive market power and use it to increase prices, drive down wages, and send the profits to stockholders and senior management. Why does this not merit attention? Between 2019 and 2021 the Walmart family’s combined fortune grew by $4m an hour to $200 bn, much of it taken from America’s increasingly impoverished workers, farmers and suppliers.

The sixth is the realm of social welfare, the need for a new social contract, and a serious debate about which route is best. Is it  Universal Basic Income, Universal Basic Services, or a Universal Job Guarantee? Jayati Ghosh engages with the debate, but seemingly no-one else does.

Finally, I missed any consideration of economics itself. I was hoping to see some questioning of the standard assumption that the economy is a machine, and maybe some discussion as to whether economics can ever be a science, however sophisticated the modeling.

I was hoping to see some questioning of the standard assumption that the economy is a machine.

Many of these people are not in academia, and that’s how it should be, for on this reckoning, the new paradigm we need so badly will not be found within academic economics at all.