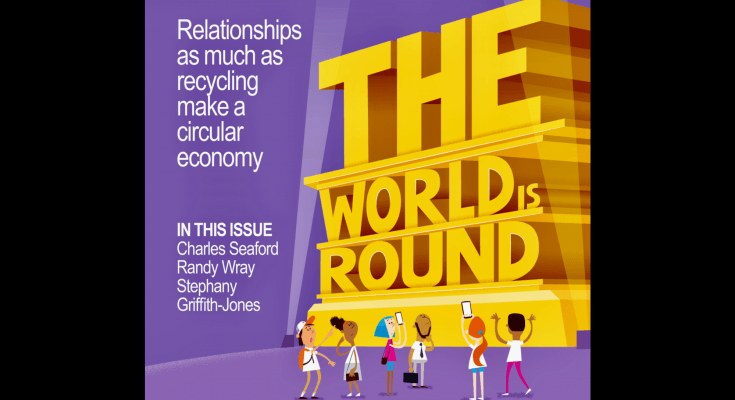 Calls for a more circular economy – otherwise known as “closing the loop” – are now commonplace. We have got recycling, we try to reduce waste, and plastic packaging is now close to the devil.

Of course, none of this is particularly new. Back in the late ‘80s, I was part of a group trying to establish a community business in Edinburgh that sold recycled paper and collected paper from offices to recycle – all in the same van. I remember one particular day when I cycled through a snow blizzard to get to the industrial estate to pick up the van to get on the road.

So you would have thought we would be pretty much there by now. But of course we are not.

Maybe the biggest circle involves all the stuff coming one way from China and East Asia in ships that are then filled with material for recycling on the return trip. I am not sure that is what we envisioned. And anyway much of the waste is now being refused as it turns out to be quite contaminated and often impossible to recycle.

But what would a truly circular economy look like? What is getting in its way? And is it always a good thing anyway if it means more and more stuff going round and round?

For me the dream was of long-lasting products provided as a service made up of individual components, each of which could be replaced and recycled at the end of its life. Surely not technically impossible if everyone in a supply chain was collaborating to make that happen.

But they are not. Built-in obsolescence and the creation of new fashions are the key to growing sales volumes. Competitive tendering rather than collaboration rules supply chains. Few have relationships along the supply chain more than one link either way and often do not even know who is in the supply chain beyond that.

Many see that the solution to this is in the digital sphere of blockchain and apps making the whole supply chain transparent. Maybe digital technology can help but it can also bring on and grow the surveillance society, which is about control not collaboration.

“Calls for a more circular economy – otherwise known as “closing the loop” – are now commonplace. We have got recycling, we try to reduce waste and plastic packaging is now close to the devil.”

We also have a feast of interviews, articles and columns on other tasty topics – yes, even we have a Christmas bonanza for you, but all digital, so no need for guilt.

Finance and money feature large. We talk to Randy Wray, one of our #NotTheNobel finalists about what Modern Monetary Theory is all about. Stephany Griffith-Jones and Natalya Naqvi explain how a National Investment Bank would serve the UK economy. Stuart Astill challenges us to get real with pensions in an increasingly uncertain world. And Frances Coppola reflects on the putative threat of the UK following in the footsteps of Greece, ten years after its debt crisis.

As COP25 comes to an end, Charles Seaford examines what an economic approach that was adequate to achieve net zero carbon might look like. Silke Helfrich and David Bollier explore the radical potential of rethinking the Commons, of which the climate is maybe the biggest.

We return to the slippery nature of statistics. Alan Freeman examines the North-South global divide and why it has been conveniently hidden. Erald Kolasi and Blair Fix explain a fundamental but less well-known problem – the failure of gross domestic product to measure anything at all (possibly another truth hidden by experts).

And much more, including economic institutional innovation in Kenya, economics and violence, the truth about girls and Economics A levels. Oh and Professor Verity Bastion gets a very exciting visit from the 2019 Nobel Prize winners in Economics, which of course doesn’t quite go to plan.
So do use the festive season to escape from mindless festive game shows and yesteryears’ films, and enjoy some stimulating economic reading.
Seasons greetings and best wishes for a new decade. We will, I fear, need them.