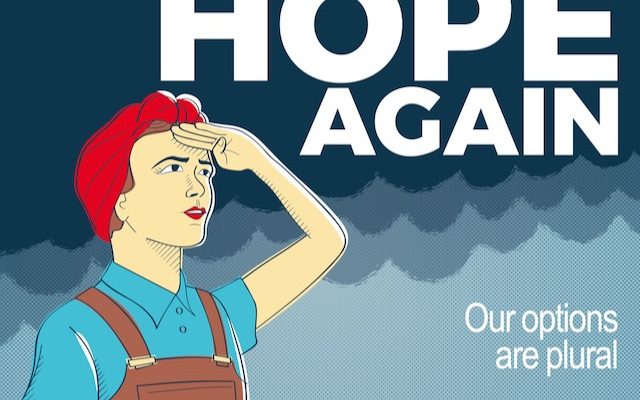 It all started with hope. Now we have viral infection. But there is still hope.

I came up with “hope” as the theme for this issue in the autumn. I was not thinking of Covid-19. Nobody was. My thinking was: we are at the beginning of a new decade with multiple, huge and growing challenges, we desperately needed a focus on positive solutions.

With Covid-19, such a focus is even less easy to achieve. The horrific reports from Italy and Spain suggest an immediate future that has few positive elements. I particularly worry for my stepdaughter, a young doctor in the NHS, and others like her who will be on the front line. Reports on protection equipment shortages do not bode well.

At times the tone of the government’s advice is loaded with assumptions that everyone has a garden and easy access to food. And the white-collar, Marie Antoinette-esque derision of “selfish” people crowding onto London Tubes suggests remarkable ignorance of those who might just have no choice.

But the 14 million in poverty in the UK and many more elsewhere, who lack a voice to explain themselves, may just be becoming more audible. Note the horror in the voice of the middle-classes pondering the nightmare of Universal Credit for the first time. The five-week delay for receiving a pittance has not been changed.

Meanwhile politicians are growing fond of using the language of war and drawing parallels with the 2008 financial crash. So which historical parallel are we most likely to follow?

At first blush, it looks like Covid-19 will have a personal impact more akin to a war, with day-to-day life being significantly and immediately affected until a vaccine is available – at least a whole year, probably longer. And many will lose their loved ones with deaths, hopefully not at global conflict levels, but equally lacking in ceremony and in similarly miserable circumstances.

The economics, on the other hand, are very different from war even if the huge debt levels will be similar. The debt accumulated by the UK at the end of World War II, over 200% of gross domestic product, provided a huge fiscal stimulus ending the Great Depression. No resources lay idle even if they were now repurposed to war. By contrast, today we are set for a huge recession with little impact from increased demand for health and online services.

“Maybe, and arguably most importantly, will the post-Covid 19 national psyche be one of “winning the peace” as seen post-World War II?”

The economics seem more akin to 2008, although potentially far worse with ten years of accumulated debt due to low interest rates, making economies even more vulnerable to a debt crisis. New lending is likely to dry up sending companies into bankruptcy as their loans come up for renewal.

So what should be saved by governments and why? Will climate change and ecological impacts be considered? Will calls for a carbon-informed recovery be drowned out by those claiming that the economy is wonderful and needs saving come what may? Certainly in 2008, the policy focus on sustainable development disappeared in the drive for growth at any cost.

Maybe, and arguably most importantly, will the post-Covid 19 national psyche be one of “winning the peace” as seen post-World War II? Or will it resemble more the deepening sense of division post-2008 as the elite, yet again, are saved at the cost of the vulnerable and voiceless?

Avoiding deepening that particularly obvious fault line will require substantial political leadership. The young, particularly those in the gig economy and rented accommodation, may feel they have yet again been sacrificed in the interests of the old. Will the vilification of the “selfish” be an excuse for treating the poor as outsiders and for increasing authoritarianism?

Famously Johnson sees himself in Churchillian terms and might prefer to imagine a post-World War II outcome. However even if he somehow rises to the occasion, he will also remember that Churchill lost the next election.

So in this issue we start with some early thoughts on the long-term implications of Covid-19.  Frances Coppola considers the long-term impact of enforced isolation, while The Outsider envisages the death of speculation as Covid-19 flourishes. And Mwangi wa Gĩthĩnji talks to The Mint about the implications for Africa, which has had very limited coverage to date.

We also still have a range of articles looking at emerging positive models for the decade, which will potentially be even more relevant post pandemic. #NotTheNobel finalist, Jessica Gordon-Nembhard, tells The Mint about her work to revive the role of co-operatives in the US, Colin Nolden and Michele Stua examine the potential of Carbon Clubs in the context of fractured international carbon diplomacy; Nick Meynen looks at a new local food model in Belgium; Marco Janssen looks at the potential of serious games for sustainability learning in India; and Tony Greenham talks to The Mint about a new model for purposeful banking in the South-West of England, the development of which he is leading.

In the policy space, Felicia Wong outlines her work to find patterns in the latest thinking in economic policy, and I set out a new approach to policy for supporting collective management of complex systems inspired by Elinor Ostrom. And Nicholas Gruen despairs at the obsession of policy makers with competition as the solution to everything.

We also have a range of articles on economics. David Gindis and Francesca Gagliardi look at a resurgence of institutional economics; Amy S. Cramer tells of her work to introduce pluralism into economic teaching; we have Kevin Deane on a new approach to designing a course on the history of economic thinking and we hear from a student on the other end of economics lectures in a mainstream university. Our very own A-level teacher confesses to her continuing love of physical books for teaching.

And five of our #NotTheNobel finalists tell us what their books of the last decade were; John Komlos reviews what could be a book of the next decade were; Deaths of Despair and the Future of Capitalism by Anne Case and Angus Deaton, while Guy Dauncey imagines the next decade from the vantage of the World Economic Forum 2030.

Keep well and safe in these unprecedented and shocking times. And let’s hope that, working together, we can realise the possibilities for a better future that could emerge from this current pain.