Capitalism has brought us full circle to a place that looks a lot like where we stood just before the crash in 2007.  Sameer Dossani says the way forward is in a very different direction.

In 2007 only a true cynic would have imagined that 12 years after Lehman collapsed, the global economy would again be on the brink of a similar crisis. Yet the world in 2019 is characterised by inflated housing markets, financial institutions that use opaque financial instruments to underestimate their risk, and an unaccountable and under-regulated class of speculators. Before thinking through how our generation has failed to learn the lessons of 2007, we need to ask a fundamental question: is capitalism worth saving from itself?

Capitalist economics – even adequately regulated capitalist economics – is based on a series of lies. These start at the micro level. The utilitarian fantasies of Jeremy Bentham and John Stuart Mill might tell us a little about human moral philosophy but they tell us nothing about how humans make decisions. Current evidence demonstrates that consciousness barely comes into the process of human decision-making and reason is probably not at all related. Since humans don’t make decisions that maximise their happiness (utility, profit), much of what we know about macroeconomics is based on lies.

“Since humans don’t make decisions that maximise their happiness, much of what we know about macroeconomics is based on lies.”

The biggest lie is that economics can be separated from politics. When a handful of elites (at most 0.7% of the population) control a huge percentage of the world’s wealth, they can effectively “own” the entire political class. In the US this is perhaps taken to an extreme, but it is a problem in all economies. Elite capture becomes more sophisticated in developed economies, but it never disappears.

Elite capture is a feature of capitalism, not a bug in the system. Our economic systems have roots in a pre-capitalist time when European mercantilist states were competing fiercely

Sameer is a PhD candidate at the University of the Western Cape, South Africa and co-founder of the website PeaceVigil.net. Sameer has two decades experience campaigning against Washington Consensus policies … 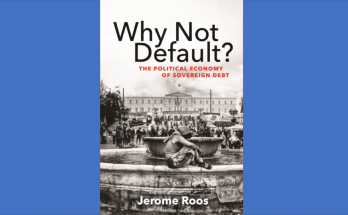 Why Not Default?: The Political Economy of Sovereign Debt