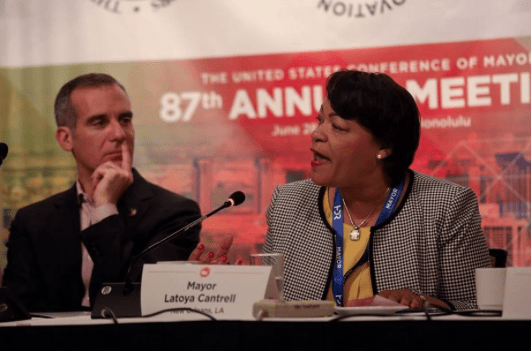 The U.S. Conference of Mayors opposed any limits on suing fossil fuel companies over climate change, which would rule out a carbon tax plan supported by industry.

The mayors of hundreds of U.S. cities called on Congress this week to pass legislation to put a price on carbon emissions, citing the financial and social strains their communities are already experiencing because of climate change.

After some contention, they also voiced opposition to any congressional action that would limit cities’ ability to sue fossil fuel companies for damage linked to climate change. That vote marked a stand by the mayors against one of the key policy trade-offs sought by big oil companies that have backed the idea of carbon pricing.

“We need our elected leaders in Washington to do what many of us as mayors are already doing at home: Move swiftly to adopt policies to mitigate the effects of climate change and ensure the long-term health of our environment,” Biskupski said in a statement.