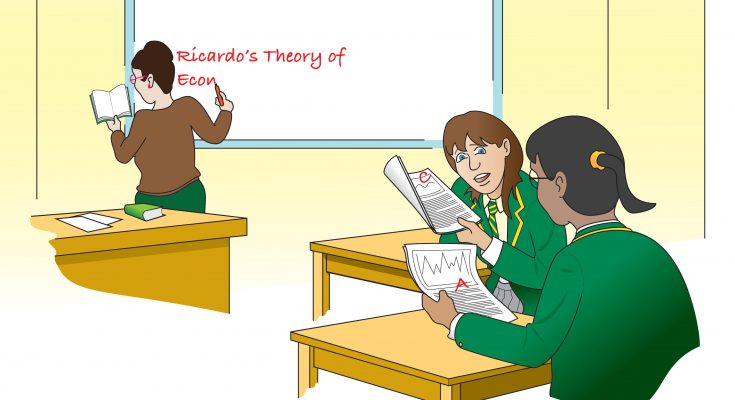 “You can tell she’s really a geography teacher – She’s marked down my graph for looking like the Cotswolds instead of the Dolomites!”

With a shortage of economists willing to teach, others are delivering the goods.

Teachers love their holidays and especially the Christmas holidays. The advent of Christmas means that the dreadful first term (September-December) is finally over. It’s a term that starts with the misery of coming back after six full weeks of summer and ends with the drudgery of a morning/evening commute in darkness. As an A level teacher, it’s also the term where most of the “grunt” work needs to get done. Despite a three-term year, exams (whether real or mock) tend to dominate the summer term timetable and so three terms of subject material ends up being crammed into two.

Less than one week into my holidays this year, however, and I am back working. I’m not teaching but I am sat in the workroom of an independent school where an educational firm that wants to provide resources for A level economics students has requested that I, along with four other heads of economics, act as consultants.

As I look around the other four “selected” heads, I see a group of highly-competent individuals whom I trust with my subject. The educational firm has done a good job with its recruitment; these teachers embody what I think good economics teachers (in fact, all teachers) should be. They are confident and knowledgeable about the subject material, they have a good idea of types of lessons that work for them, they understand the nuance of the exam board specification and exam questions, and they know the common misunderstandings that students have. I have never set foot in any of these teachers’ classrooms but, from our discussions around the table, I can confidently say that all of these individuals are the type of teachers I would want to teach my children. And that, after all, is the ultimate test.

“A level Economics students in 2019 should not assume that they will be taught by an economist.”

They do not, however, represent the majority of economics teachers. And the educational firm employing us knows it all too well. They have seen a profit-making opportunity. Computing is the fastest-growing A Level subject in the UK. But economics is a close second. In 2018, over 32,000 students took the A level economics exam. This number is up from just 15,000 in 2002.

If you look at the main periods of increase you will see a sharp uptake in (2007/8) and again in 2016/17. Why? I assume that this is down to real world events – in particular, the financial crisis (2007/08) and then the Brexit vote (2016). Students want to study economics because they want to understand what’s going on around them. Economics, they figure, is the subject that can most effectively answer their questions about the world; about global catastrophes and the big political changes. Economics is the key to unlocking their confusion.

Unfortunately, our merry band of five do not represent the majority of economics teachers who are teaching those knowledge-hungry students. Firstly, we all have economics degrees. Secondly, we only teach economics. Thirdly, we all teach at independent schools. What the educational firm has realised is that A level economics students in 2019 should not assume that they will be taught by an economist. In fact the opposite is true. The majority of economics teachers in the UK today are non-economists (by that I mean that they do not have a degree in economics). So what?

It is absolutely not the case that someone must study economics at university to be able to teach economics effectively at A level. In fact, in some cases, it may even be desirable to have a non-economist tackle some lessons (quite frankly, the prevalent economic theory doesn’t always do a good job of explaining the real world). But, nevertheless, the diagrammatic model- based nature of our subject demands technical competence. Learning the shape of lines on a graph is not the same as understanding why they are shaped like they are and why they move like they do. An economist who is well-versed in the subject’s concepts and ideas can draw on those concepts to derive the different lines and, as a result, she has a head start on any non-economist.

“Absolutely not the case that someone must study economics at university to be able to teach economics effectively at A level.”

If economics isn’t being taught by economists, then, who is it being taught by? The simple answer is: by specialists in other areas – increasingly psychology, geography and even sociology teachers. Although economics is a growing subject, it’s still not as big as many other subjects. Believe it or not, psychology is the third largest A level out there (after maths and English); over 70,000 students take psychology A level per year. And so, the average sixth-form college typically has four psychology classes per year-group (two in the lower sixth and two in the upper sixth), while there is only one economics class per year-group. This is not enough to warrant a full-time member of staff. Far from it. At best it’s a 0.5 contract, more likely to be 0.4 or lower. So, schools either have to recruit a part-time economist or, more likely, try to use one of their existing staff members (from the psychology/geography/sociology departments) to plug the gap.

Additionally, economics teachers are just really hard to recruit. Most people who study economics at university don’t tend to choose to go into teaching afterwards. The average undergraduate studies economics because they want a career in finance, in London, for one of the big four accountancy firms.

The starting salary in London for financial analysts is more than double the starting salary for a teacher and the gap widens exponentially with time. Quite simply, the incentives don’t stack up. To convince an economics graduate to become an A level teacher is a tough ask. Presumably, the only reason some graduates (like me) do is because they have done the cost-benefit analysis and come to different conclusions over the value of our leisure time:13 weeks holiday a year is worth it.

But, there’s the other issue too. We all work in independent schools. The answer, again, is incentives. Independent schools have more holiday (17 weeks), less disciplinary issues, better canteens and access to more career opportunities. Oh, and they pay more. The state sector, therefore, loses many of its economics specialists to the independent sector. This causes a concentration of resources there and a scarcity back in the state sector.

All of this matters. Paul Samuelson famously wrote: “I don’t care who writes a nation’s laws – or crafts its advanced treatises – so long as I can write its economics textbooks. The first lick is the privileged one, impinging on the beginner’s tabula rasa at its most impressionable state”.

The problem with most people’s interpretations of this quote is that they focus on university being that “first lick”. That may be true in the USA where there is limited scope for teaching economics before the college years. It is fundamentally not the same in the UK. Over 85% of economics undergraduates in the UK universities have done economics A level. They haven’t just had the first lick, they’ve already eaten their way through a couple of tubs. More worryingly, is that most of that learning was not taught by an economist. More likely, it was a business, geography or psychology specialist filling in a manning gap.

“Leaving it until university to try and influence the direction of economics is too late.”

Pluralist pressure groups such as Rethinking Economics would do well to consider this problem when they develop their future business strategy. In my opinion, leaving it until university to try and influence the direction of economics is too late. Students are licking away at the subject two years before university and the quality of teaching specialism may be relatively poor. Surely this is the space, the vacuum and the opportunity to set the future agenda for the subject. They must target that void, that blind area that is left behind by the well-meaning but out-of-depth psychology teacher who needs external support from somewhere.

The profit-making educational firm has seen an opportunity here, but they only really want to cut-up mainstream economics into bitesize regurgitative Powerpoint slides. It would be nice to think that the pluralist movement might respond with its own brand of resources. Non- economists are likely to be more receptive of pluralist concepts as there are obvious links to their own specialisms: psychology and behavioural economics; geography and environmental economics; sociology and Marxist economics. They would undoubtedly prefer an alternative to the constrained neo-classical concepts.

The nay-sayers will argue that students still have to pass a narrow (neo-classical) economics exam. That criticism misses my point entirely. The real point here is that there are lots of “economics teachers” who are already struggling to teach basic, neo-classical economics because they are non-economists. Giving those individuals an easier way into the subject via touchstones in their own areas of expertise suddenly becomes a game-changing tool.

Let’s take an example: the concept of “common goods”. From a standard teaching point of view, the main thrust of this topic is to conclude that self-interested behaviour leads to the exhaustion of resources. But that’s a problem for a geographer or a sociologist who spends most of his/her time considering how communities thrive by actually sharing resources. We should encourage those teachers to introduce such topics in their own way and allow them to present the standard economic model afterwards, without feeling like they have to defend it. In fact, they can critique it and pull it apart as much as they want. And that should be easier for them because they are coming from a strong comfortable base.

Understanding ”the theory” and defending ”the theory” are too very different mindsets. A level exam boards might be quite narrow but there is absolutely no expectation that students have to defend or justify neo-classical theory. They have to understand it, sure, but understanding can be learned from deconstructing and critiquing. In my opinion, it is possible to tick the bullet points on our exam board specifications whilst also making life easier for the non-economists and more pluralist for the students. Here is a real opportunity; to think otherwise is defeatist.