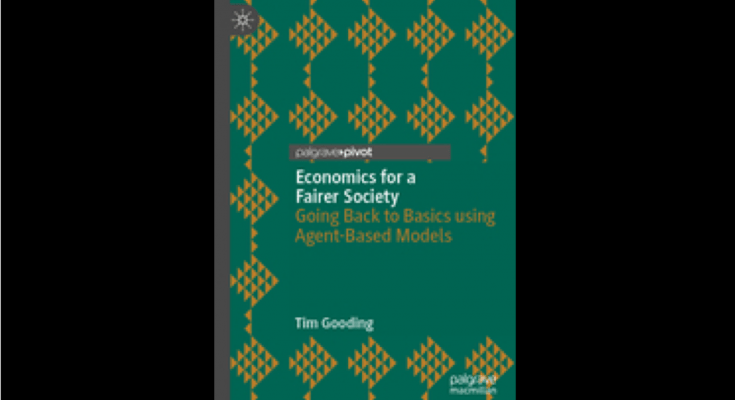 Tim Gooding articulates a bold and detailed vision for complexity and agent-based economics, but ultimately left me feeling frustrated with a book isolated by its insistence on standing so far from the crowd.

My own frustrations with studying economics at undergraduate and postgraduate level in the UK led me to sociology, complexity science, and agent-based modelling. Gooding seems to have been on a similar journey. He articulates many of the problems with mainstream economics, not least its use of overly simple models. Despite similar critiques being made elsewhere, the discussion feels fresh, it also condenses large swathes of economic thought neatly. This freshness stems from Gooding’s insistence on taking an unusual – radical even – approach to describing economic questions. He returns to underlying theoretical ideas which feel as though they fly in the face of modern economic teaching, because they do. While this radical nature gives the book a novelty, it also seems to undermine some of its aims, and makes it an awkward read, a missed opportunity, not quite delivering on its aims, because it fails to build on others’ work enough or to convince the unconverted.

It is difficult to summarise the book’s basic aim because it seems to have several, jumping between them, but if forced I would say it seeks to put forward a vision of complexity economics, teaching us partially about agent-based modelling and showing us interesting model results along the way. It starts by setting out its clear and bold vision for complexity and agent-based economics. It also contains an unusual but fascinating chapter describing the author’s experiences working with a First Nation (indigenous people) in Canada on economic development. The chapter would be very interesting on its own but is even more valuable as used by Gooding to outline his motivation for the book and his wider view of economics.

These chapters set out the rhythm of the book, short and punchy, austere in discussion to the point of leaving you feeling lost as to where we have been and where we are going. This is compounded by the middle sections with disconnected chapters on definitions, and discussion of models and modelling. These contain important material and ideas, but they feel oddly stale spread across several detached chapters, seemingly crowbarred into a book format. The book itself repeatedly left me confused as to whether it wanted to be a textbook, polemic, purely academic piece, or something else; in the end, it is not quite anything clear.

While the book focusses on agent-based modelling to give it discipline and a clear scope, the author seems unable to stop himself going into the much richer discussion; a discussion which is informative but feels unfairly constrained by the focus and pull back to humdrum modelling details. At other times, Gooding seems to be pre-empting or revising text for an unduly mean, or anti-agent-based modelling reviewer, providing heavy-handed caveats, or elaborating on unnecessary details.

The flow and content of the book improve in the later chapters where more of the substantive material is located. Gooding explores how we can think of the economy as containing evolutionary dynamics (a point he labours, where I would have assumed it’s a given), and how these can change our view of economic theory. Particularly good are the chapters on the relationship between price, supply and demand, on money distribution (inequality), and on using models with more realistic populations. These articulate in great detail how thinking and modelling differently can both give us new insights, but also show how wrong old models might be. These chapters really deliver on some of the early promises of the book and, I think, the author’s goals. It is just such a shame it takes so long to get there, and they all feel so disconnected from the whole.

As a sympathetic reader, one who largely agrees with the author’s worldview, perhaps my biggest fear is that the book will fail to convince many economists to make more use of agent-based modelling, or think of the economy as a complex system. The leap simply feels too great (and too unassisted by the book) to be made by non-converts. If I were to recommend books to try to help people make that leap, it would be Kate Raworth’s Donut Economics, or Eric Beinhocker’s The Origin of Wealth, books that Gooding himself mentions but doesn’t use or build upon directly. I would also be tempted to point readers to the wealth of agent-based and complexity economics’ academic literature which has appeared over the past 20-30 years, and which Gooding largely ignores. For the real cynics, I might even point to the work the Bank of England has done with agent-based models.

The book will be useful to those who already take its worldview, and want to explore in more detail how agent-based modelling might help us theorise and understand the economy afresh. Undergraduate students, and maybe even high-school students, will also likely find the book (particularly the early chapters outlining the vision, motivation and concepts) interesting and useful, even if many of their professors and teachers might not want them to read it. Those working in academia as researchers, or economists in industry or government are likely to find the book more frustrating because of its lack of connection to related literature and its lack of wider narrative.

Tim is keen to understand how emergent behaviour and evolutionary forces shape the market and society. One of his goals to bring complexity into economics and increase the understanding of …