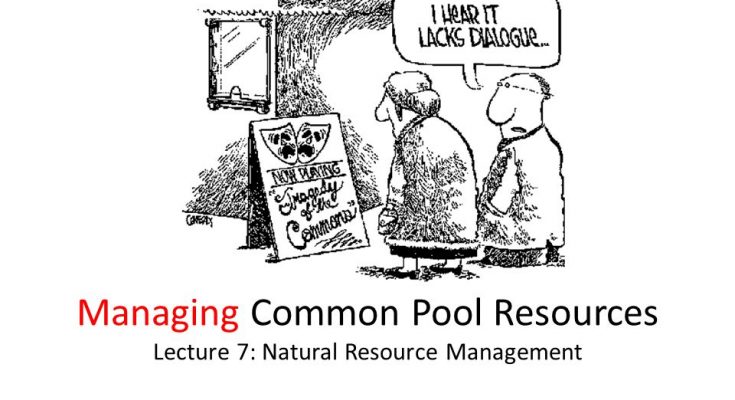 The theme of this issue is common resource management. This may seem a niche interest but when you think about it there are many resources we have to manage together. Beyond the physical environment, there is information, knowledge, public health, security, culture. The list goes on.

Our inspiration is Elinor Ostrom, the only female winner of the Nobel Prize for Economics [CONFIRM]. She studied, in detail, collaboration systems that had successfully evolved in communities around the world to manage water resources. She demonstrated that the so called “tragedy of the commons” was not inevitable.

Or to put it another way, markets are not the only form of effective collaboration. This is of course lucky for the human race as they are a relatively modern social innovation. Think hunter gatherer teams bringing down animals that could have killed each of them individually. They managed marvellously well without markets.

We too examine collaboration in water resource management. Bromwich and Koehler explore approaches that accept pluralism in perspective in the aftermath of conflict in Sudan and in the villages of Kenya. Ma’mum returns to her roots in Indonesia to explore the contrasting experiences of two remote villages.

We also have articles on collaboration in food production, health provision, eco-villages and even space mining. We talk to Tessy Britton about how she has developed an approach to normalising community participation in Barking and Dagenham.

Gruen writes persuasively on how economics must recognise that the public and the private are inextricably intertwined. He points out how this has become even more significant since the advent of Facebook, Google and the like who manage the commons of information. Should they just aim to “do no evil” as Google famously pledged? Or “do the right thing” as Google now promises? And can we trust them?

We also of course consider arguably the biggest global common resource management challenge humanity faces: climate change. Few will have missed the most recent – and inevitably conservative – report of the International Panel on Climate Change. In case you are one of the few – it was squeezed between Brexit moves and counter-moves – it gave us a decade or so to take common global action to a new level to avoid dangerous climate change.

Our main newspapers only considered it worthy of attention for a day. Our Government wrote to the Climate Change Commission to ask it whether there was a need to change our carbon reduction ambitions after 2032. A bit late. It also didn’t request advice on increasing our efforts at adaptation which look like they are going to be sorely needed.

Then Climate Transparency estimated that current global investment plans for building fossil fuel power stations effectively locks us into 3.2°C. This is well beyond dangerous.

Meanwhile the potential for international collaboration reduces with climate change deniers in the highest offices and trade wars breaking out. Current international commitments resulting from Paris in 2014, if fully implemented in the absence of any enforcement mechanism, leave us facing even more than 3.2°C.

Love and Benjamin explore how we can face up honestly to the peril and take action. The Outsider wonders whether a realistic strategy could build off “heroic” nationalism. Set an example and others will follow?

What do you reckon? The standard options seem to be denial or despair. Well actually there is a new option. Join the Extinction Rebellion and get arrested. But how is that going to lead to international collaboration to manage our shared climate, you may ask.

At this point it is worth remembering that the road to collaboration is not necessarily one of workshops, post it notes and joint declarations. As we are now often reminded, the EU was conceived in the blood and carnage of the 2nd world war. As was the UN, the World Bank and the UK welfare state.

Non-violent civil disobedience has a long record of leading to fairer collaboration with somewhat less bloodshed. Consider the US civil rights movement, independence movements and other uprisings of the down trodden. So maybe Extinction Rebellion is the cold bucket of water we all need to face up to this reality.

Then we must remember our super power as a species is our ability to collaborate for good or evil. Think language, law, finance, politics, religions, armies and of course getting to the Moon. The list is endless.

Get real, break the silence, take action. And hope Silicon Valley billionaires are misguided in their rumoured plans to leave earth to its fate. Clearly Dennis’s article on space mining suggests they are readying local space to provide the fuel for their escape….