I find it hard to keep up with Crispin McDonal, my former star pupil and finance wizard.  He is now all over Breakfast TV talking about his Damascene conversion.

Crispin has gone into care.  By that, I mean as an investor in the sector rather than a resident of a care home. Apparently he saw the light during an interview with Dr Hugo Magwitch, the author of A Deficit of Nurturing.  Crispin had suddenly realised that his drive to accumulate came from a desperate need to compensate for his lack of care as a boy. What’s more he saw opportunities for huge returns as anti-vax staff fled state-funded care homes in revolt against mandated Covid immunity.

Talking on the Breakfast sofa Crispin wailed that he had been driven to the local prep school aged seven by his mother. He recalled, as if it was yesterday, the moment on the stairs when the master receiving them had instructed his mother to pass Crispin’s case to   him to carry.  The master intoned that from now he had to carry his own case.  It had been a small case but at that moment it had seemed very heavy.

Or at least, that was Crispin’s story for the cameras.

Speaking to him after his performance he shared with me some of the less romantic vignettes from his schooldays. (And I would say his rather high-ranked alma mater should be grateful that he kept them quiet on national TV).

Most of his first term, he says, he spent suffering from dysentery in the sick wing courtesy of the filthy school kitchen. His mother, it seems, had not been allowed to visit because he had to learn independence. I don’t imagine that that learning was meant to include the sex education he received from older boys in the sick wing with whom he shared a single toilet.

And I didn’t say, but I suspect the lack of maternal intervention was not entirely down to school rules.  As I recall his mother boasted to me at her son’s graduation of spending most of the last quarter of every year in the 1980s at Courchevel where she too expanded her carnal horizons with the resort’s ski instructors.

But Crispin now had the answer to the challenge of ensuring everyone was properly cared for: Care Impact Bonds. They were going to create the new “Wellbeing Economy”, which seems to be a rebrand of Cameron’s happiness economy idea in the late noughties.

Crispin is passionate about them.  However much I feel for Crispin’s tortured childhood, I am increasingly sceptical of his schemes. I’m relieved at least it wasn’t the lessons learnt under my tuition that led the boy to his latest ruse.

I do wonder about the games likely to be played around defining and monitoring “care outcomes” when large profits are at stake.

Closer to home, caring has certainly taken over our apartment. Thomas, my wonderful husband, is now caring for a carer called Ilona in our sitting room. He found her collapsed in the corridor due to exhaustion and hunger.  The cut in Universal Credit had meant she had neglected herself in favour of feeding her children.

And McDonal & Bone, the managers here at Ash Court, have put out a call for volunteer carers to address the loneliness deficit amongst their residents.  They are offering digital badges to recognise contributions. I would imagine this is part of Crispin’s new crusade.

I learnt more about this from Charmaine Sharpe, M&B’s head of policy. I had requested a meeting with her to discuss their duty of care policy after I was attacked in the communal laundry by a naked resident with dementia whose clothing was in the tumble dryer.

Charmaine assured me that my safety was their greatest priority. They were going to use this new volunteer scheme to address the root causes of the violence I had experienced.  From research they had commissioned, they had discovered that once their residents were less lonely, they were less violent.

When I asked her how this addressed the immediate risk of violence I faced, her explanations were unsatisfactory. The exchange ended with her telling me to “stay calm” and beating a hasty retreat.

I am not calm and all of this is not helping with completing my book.  In truth I wouldn’t mind a spot of loneliness and peace somewhere to get it done. Still there is always plan B morphing into lockdown to hold out for. 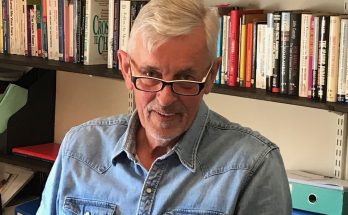