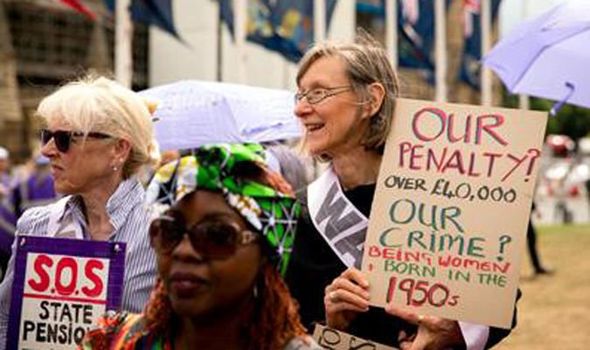 Productivity in the UK workforce is struggling to serve the nation’s growing number of pensioners. Frances Coppola asks: where is technology when you need it?

The leaders of campaign groups fighting the women’s state pension age rises were unimpressed. One claimed the Department of Work and Pensions’ (DWP’s) figures were a “tactical move” to “mislead public opinion” regarding the cost of reversing state pension age rises; another said that campaigners would “take issue with any cost analyses provided by the DWP”.

Now, the Office for Budget Responsibility (OBR), the government’s fiscal watchdog, has muscled in. In this interactive graphic, it shows the effect on public finances of a sharply rising old age dependency ratio. Government debt is set to rise exponentially.

The dependency ratio is the proportion of active to inactive members of the population. “Active” means all those who are doing paid work, while “inactive” comprises children, stay-at-home parents, people who are too sick or disabled to work, full-time unpaid carers, and those who have retired from work. In developed economies with generous state pension systems, the majority of those classed as inactive are retired. The OBR therefore uses a narrower measure called the “old age dependency ratio” which relates the proportion of retired people to workers.

“Is it reasonable to delay a woman’s state pension until she is 66 when throughout her working life she has expected to stop working at 60?”

Economically, people classed as inactive are supported by people classed as active. This relationship may be explicit, as in a working husband supporting his non-working wife (or vice versa): or it may be indirect, as in a state pensioner whose pension is paid from the social security contributions of younger people. The indirect relationship is known as the “social contract” and it is expressed in practical terms through the tax and benefits system, with active people paying taxes and inactive people receiving benefits (including “unfunded” state pensions).

The proportion of the population that is inactive is rising sharply due to increasing longevity, a low birth rate, and the retirement of “baby boomers” born in the two decades after the end of World War II. OECD data show that in 1975, there were four workers supporting every state pensioner, but by 2075, there could be as few as two working adults for every person over 65.

Fewer working-age adults supporting each pensioner means either higher taxes for those workers or lower pensions. Neither is politically acceptable, so governments across the Western world are trying to increase the active population. One way of doing this is to keep people in the workforce who might have left it, and/or bring people back into the workforce who have previously left. Welfare changes are already forcing sick, disabled, and mothers of young children into the workforce. But a far larger increase in the active workforce can be achieved by delaying the age at which people receive state pensions.

Is it reasonable to delay a woman’s state pension until she is 66 when throughout her working life she has expected to stop working at 60? If the answer is no, then it is hard to justify the planned rises for younger people. After all, every woman born before the 1995 legislation that equalised men’s and women’s state pension ages at 65 arguably has a legitimate expectation of pension at 60, and every man born before the 2007 legislation that raised state pension ages to 66, 67 and 68 equally has a legitimate expectation of pension at 65.

The OBR’s grim forecast is grist to the mill of those who oppose the 1950s women’s claim. Faced with such evidence that maintaining an ever-larger inactive population is unsustainable, who can argue that state pension ages should not rise significantly? But this is contradicted by the march of history.

During the Industrial Revolution of the early 19thcentury, men, women and children were active members of the workforce. The report that led to the Collieries Act of 1833 found children working in the mines from as young as four. Pregnant women worked until birth and went back to work straight afterwards – some textile mills had “breast holes” through which working women would feed their babies. Prior to 1834, if people became too frail or ill to work, they might go into “poorhouses” where they would be cared for until they died. But after 1834, social care for those unable to work was abruptly ended. The old and infirm went into workhouses, where they were forced to work.

As prosperity rose in the 19th century, marginal workers gradually left the workforce. The Factories Acts ended child labour for humanitarian reasons and to ensure their education, while married women left the workforce due to a widespread perception that doing paid work prevented them from being good wives and mothers (this was explicitly stated in the Collieries Report, as a result of which women were banned from the mines). In 1908 the first old age pension set an age at which people would no longer be expected to work, although it was less generous than today’s state pension ages: it was payable from the age of 70 to men and women.

“Faced with such evidence that maintaining an ever-larger inactive population is unsustainable, who can argue that state pension ages should not rise significantly?”

This was dressed up as benevolence and virtue, but it was in fact made possible by rapid technological change in the two Industrial Revolutions. Enormous productivity gains enabled companies to pay the higher wages demanded by a smaller, predominantly male, workforce. By the 1930s, it had become the social norm for men to earn enough to provide a decent standard of living for their families. A working wife was a social stigma for a man, since it signalled that he could not keep his family. Unsurprisingly, only 10% of married women worked.

Not only did marginal workers leave the workforce, but also those who remained worked less. In the early 19thcentury, men, women and children alike worked 12-16 hours, six or seven days a week. But by the 1930s, the eight-hour day, five-day week had become the norm. Technological advances had made it possible for fewer workers working fewer hours to produce far more than the entire early 19thcentury workforce had ever done, raising living standards to a hitherto unimaginable level. In 1930, John Maynard Keynes speculated that in a distant future, there might be no need for people to work at all.

But nearly a century later and despite living standards (particularly health and longevity) having improved even more, we are intent on making more people work, and for longer. Productivity has stagnated along with wages. Yet we are going through a period of technological change so intense that it has been called a “Third Industrial Revolution”. Why isn’t this raising productivity to the moon? Why isn’t it enabling people to work less or leave the workforce? Why is the rising old age dependency ratio a threat to our future wellbeing? If technological changes today did what they have in the past, the wages of future workers should be more than enough to support a very large inactive population.

Defending against the women’s claim, the government says that future generations should not end up poorer because of unfunded promises that current generations have made to themselves. But underlying this is a tacit assumption that technology can no longer deliver productivity improvements that would make it possible for these women, and many others, to leave the workforce without impoverishing future generations.

In an ideal society, everyone would have the means to live without having to work for it. But we seem to be even further away from this now than we were in the 1930s. If technological change cannot make our economy prosperous and our society benign, what on earth is its point?

Growth… a tale of make believe