Skip to content
ShareTweetPin ItShare
People pull together when times are tough. Governments should let them. Guy Dauncey explains.
In the 1870s there was a surge in the numbers of self-help groups in the US as cities sprawled, creating slums and tenement blocks crawling with disease and crime. Inequality was at an all-time high, and people worked for starvation wages. In his book,  Bowling Alone: The Collapse and Revival of American Community, Robert Putnam tells us that in response to the distress there was an upsurge of public engagement and an explosion of clubs, churches, societies, fraternities and lodges, including the Shriners, the Loyal Order of Moose, Big Sisters, Hadassah, the Kiwanis, and the Optimists. Many of these organisations still exist.

And 150 years after that American upwelling of self help, all over the world, people are organising themselves to help each other in the face of the Covid-19 pandemic.  In the UK alone, 4,625 groups have listed themselves as a Mutual Aid group on the wiki site created by volunteers.

“The impulse for self-organisation is present in the birth of every cooperative, credit union, public park and public library.”

Back in March, when the pandemic struck, thousands of people started organising, inviting friends and neighbours to help them meet people’s urgent needs, from childcare for healthcare workers to food delivery for shut-in seniors. As the months passed, most groups found that Facebook provided a great self-organising medium, enabling the willing to connect with the needy. Beyond the initial connection, however, it takes organisational skill to keep a group of volunteers going.

The impulse for self-organisation is present in the birth of every cooperative, credit union, public park and public library. Today, a town of 250,000 people might have a thousand volunteer groups and non-profits. When these efforts are combined, the self-organising impulse contributes to community wealth (see box).

Is there a way to speed up the building of community wealth, so that it can play a major role in rebuilding local economies?

In Nova Scotia, in the 1930s, farmers, fisherman and miners were all struggling. St. Francis Xavier University and campaigner for economic and the social improvement with the Antigonish movement, Father Moses Coady, believed that local economies could be revitalised if ordinary people could learn about cooperative economic development and entrepreneurship.

Cooperative Economies
When the self-organisation instinct is focused on the economy it can have incredible impact. Barcelona provides a great example.

Progress can be substantial when a community organises around the power of local money. In the US state of Maine, Coastal Enterprises focuses on rural poverty and community economic revitalisation. Since 1977 it has invested over a billion dollars and created 33,000 full time jobs. In the Canadian province of Nova Scotia, provincial equity tax credits focused on community benefit have inspired people to invest $100 million in 76 projects, including food, renewable energy, and a diverse range of co-operative and social enterprises. In Britain, Community Shares have enabled 100,000 people to buy £82 million worth of shares in 300 community enterprises, ranging from football clubs to wind farms.

They set up study groups in people’s homes, where people learned about agricultural methods, business organisation and economics. The study groups organised cooperatives, and the university’s Extension Department supported them with a six-week programme in cooperative business, book-keeping, mathematics, economics, public speaking and citizenship. In the small fishing village of Judique, on Cape Breton Island, twelve study groups formed in 1932. They built a lobster factory and paid off its cost in two years. They built another, then opened a credit union and a co-op shop.

By 1938 there were 1,100 study groups and their 10,000 members had formed 142 credit unions, 39 cooperative stores, 17 cooperative lobster factories, 11 cooperative fish plants and 11 other co-ops. The same process worked in America. In Collective Courage: A History of African American Cooperative Economic Thought and Practice, Jessica Gordon Nembhart writes: “Every black co-op started with a study group. They came together to study their situation, and eventually found and studied cooperative economics.” A study group is less intimidating than a university lecture-hall, which may explain its appeal to minorities and ordinary working people.

Most governments operate in a top-down manner, delivering services or programmes to their people, expecting taxes, gratitude and votes in return. Rarely do they seek to mobilise the power of community mutual aid. In Radical Help: How We Can Remake the Relationships Between Us and Revolutionize the Welfare State, Hilary Cottam tells how soon after Sir William Beveridge’s 1942 report was published, giving birth to Britain’s welfare state, Beveridge realised that he had made a big mistake. He had provided no role for local communities, and mutual aid. The professional bureaucrats assumed all the power, and the result was predictable: the sense of powerlessness of people on the blunt end of the welfare state. Governments have a crucial role, but they need to change the delivery of welfare so that it empowers personal and community agency, instead of suppressing it.

Because of the dire realities of ecological and climate emergencies, there is growing agreement that we need to achieve a rapid and widespread transition from the selfish pursuit of individual wealth to the shared pursuit of community and ecological wealth, enabling everyone to enjoy the benefits of Kate Raworth’s ‘Doughnut Economics’. When governments plan how to rebuild their post-pandemic economies, they would do well to consider the potential of cooperative self-organisation. With the pandemic destroying so many businesses, causing so many evictions and generating so much unemployment, we have more need than ever for cooperative self-organisation, by people, in their own communities.

“We need to achieve a rapid and widespread transition from the selfish pursuit of individual wealth to the shared pursuitof community and ecological wealth.”

To achieve this, governments need to work with non-profit and social enterprise leaders to develop nationally-funded programmes of Cooperative Public Renewal, supporting the training of community economic leaders and the establishment of study groups. Such groups would enable the members of those thousands of mutual aid initiatives and other non-profits to learn about community economic development, climate action and ecological restoration, and acquire the skills and confidence to build partnerships, assess their communities’ needs and take initiatives to address them.

When the pandemic finishes, will people want to return to business-as-usual, or to build back better? The pandemic has brought a sharpening of grief and of kindness. Meanwhile, the climate and ecological emergencies are as dangerous as ever.

When times are comfortable, people relax. When times bring trouble, people self-organise. In these very troubling times we need all the self-organising we can get, and governments can help by empowering communities to tackle local problems. In this way, rather than feeling despair, people can take charge of their future, and begin building a far better world.

■ Guy Dauncey is the author of Journey to the Future: A Better World is Possible and other titles. He lives on Vancouver Island, in Canada. His website is www.thepracticalutopian.ca

Guy Dauncey is an eco-futurist who works to develop a positive vision of a sustainable future, and to translate that vision into action. He is founder of the BC Sustainable Energy … 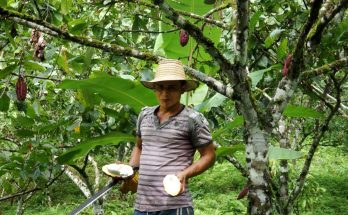 Cooperation and Chocolate: The Story of One Colombian Village’s Quest for Peace