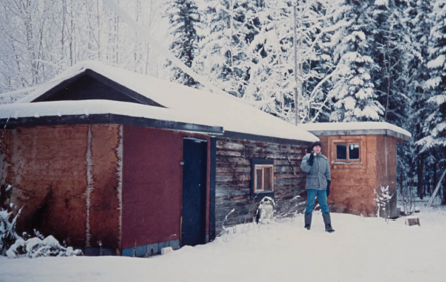 A remote mountain community was torn up when the free market came to town. Tim Gooding describes his findings on the cost of money.

In 1991, I was hired by the Little/Salmon Carmacks First Nation to be their Economic Development Officer. My job was to initiate the transformation of their indigenous community into a functioning free-market society. The Canadian government gave the first nation five years of funding with which to transition the community.

Carmacks is a remote northern community of a few hundred people in the Yukon Territory, Canada. I lived in a log cabin with no running water or electricity. I used a wood stove for heat, paraffin and oil lamps for light, and an outhouse. It never got below -57 degrees Celsius. If anyone wants to know a trick for enjoying a warm comfortable outdoor toilet seat in -50 C degree temperatures, I’m your man.

The community was in distress. In beginning of the twentieth century, residence schools were introduced to modernise the society of the community. The idea was to remove young children from their home, forcibly if necessary, and place them in distant residence schools in order to create a break in their social inheritance.

Despite this, when I first entered the community there was hope. Even with the disruption, their community had retained some bonds and many cultural traditions that made most feel like they would be supported by the community no matter what happened. With self-governance on the horizon, and the promised rewards of free-market participation, people looked forward to the future.

“When I first entered the community there was hope.”

I was hired as an expert on capitalism. My economics degree gave me the theory and over a decade of working in various market sectors grounded that theory in reality. While the theory spoke of capitalism as a near utopian possibility (increasing productivity, maximising utility, individual liberty) my experience lent me caution.

With all this in mind, a five-year community development plan was put together and implemented. Using a combination of education, healing, incentive, and experience, we set to work turning the residents into good free-market citizens. We had to tackle such basic concepts as time. On time, in a hunter/gatherer sense, is an entirely different concept from “8:30 am sharp”. We rewarded people who developed free-market habits with money. We withheld money for those who did not.

A few individuals from the community built lucrative careers in business. However, for the most part, the richest in the community were those involved in their own newly formed democratic government and its rapidly increasing bureaucracy. The divide between the haves and the have-nots increased, stressing the community’s established ties. I cannot report an objective measure from my experience.

Subjectively, I experienced a community transitioning from relatively money poor, tightly knit, generally supportive, to one that was better off but increasingly divided. The have-nots were becoming increasingly bitter of their continuing poverty while the haves were developing an increasing sense of helpless frustration in trying to help and motivate the have-nots. While there were always one or two individual successes that gave hope, the overall problem remained stubbornly immutable, as is the case with many social problems in modern society.

This was not the only indigenous community in which financial success led to a social downturn. In Hobbema (now called Maskwacis) in Alberta, a very large oil reserve was discovered. As part of the deal to extract the oil, the indigenous community that lived there were given extraordinary monetary benefits. Before they even got out of bed, a family of four would make enough money to be considered middle class earners. Matters were designed so that anyone turning 18 years of age would be given enough money to attend any University in the world. Thriving upmarket shops sprung up to surround the community. According to the free-market narrative, the Hobbema community had hit the jackpot of happiness.

Meanwhile, in reality, most of their social indicators plummeted. The headline figure was that their youth suicide rates peaked at over 83 times that of the Canadian national average for males and 160 times the national average for young women. While the experiences of Hobbema and other Native American communities were discussed at length among the First Nations, no long-term solution was found. There was no choice; when the bulk of the world’s resources are controlled by the free-market, choosing not to participate promises life-threatening poverty.

It would be simplistic to say that the influx of money alone caused these problems. In discussions with other economic development officers, it was apparent that the increased purchase power and, sometimes, economic productivity was accompanied by a loss of traditional supportive networks and general contentment. In other words, the free-market was creating circumstances that changed the shape of communities in a manner that was causing harm.

Similar results have been found in global research. Diener & Diener (1995)1 found that suicide rates were inversely correlated with GDP. More recently, Oishi and Diener (2014)2 found that poorer people had a greater sense of meaning in life than richer people. In a nutshell, the wealthier nations get, the more likely it becomes that their citizens will commit suicide and the less likely they will find meaning in life. This is in line with what I observed in my time with the Little Salmon/Carmacks First Nation. Something was going fundamentally wrong in the way modern society was seeking prosperity.

These observations guided my subsequent research. It began with using my own life as a laboratory. Instead of looking for jobs to advance my career, I looked to for jobs that would offer insight into what I was researching. I spent years watching the world and trying to understand the patterns I was seeing. Finally, in 2000, I discovered complexity. It contained the key to understanding the patterns that I witnessed everywhere, most vividly in the Yukon. I concluded that the world was being shaped by an evolutionary fitness test of wealth aggregation.

“In a nutshell, the wealthier nations get, the more likely it becomes that their citizens will commit suicide and the less likely they will find meaning in life”

The main criticism I receive is that society’s drive towards wealth accumulation is obvious. However, a society with an understandable drive towards increasing its wealth and a society being shaped by an evolutionary fitness test are two completely different worlds. People with no experience with evolutionary systems tend to vastly underestimate evolution’s impact.

To the poor, it will feel like a global conspiracy designed to squeeze every ounce of profit out of them until nothing remains except surplus people. To wealthier people, it will feel like the natural outcome of their (or their families) diligent application of life strategy. However, many experiments have shown that even in the simplest monetary models, where all agents have equal ability and opportunity, money will naturally distribute itself exponentially. In other words, the starting point of monetary trade systems is exponential wealth inequality. History has repeatedly shown us the lethal consequences of such social divides including the revolutions in France and Russia.

If the world is being shaped by a wealth aggregation fitness test that means wealth concentration and increasing wealth inequality are being empowered and protected by evolutionary problem-solving mechanisms. We know evolutionary solutions can operate beyond human comprehension or foresight (Hillis 1999 3). Over time, such solutions will evolve to curb any policy or popular force that interferes with wealth concentration, even when that force is designed to preserve life.

This explains why, in our current global economy, money is considered more important than people – as demonstrated by the significant portion of the population who do not have enough food in the presence of surplus food, or more locally, the current drive to make the UK health and benefit systems “efficient”. Another demonstration is in the escalation of life-threatening pollution in Beijing and Delhi, for example, even though we understood how pollution kills people long before cities in the tiger economies started to choke. One more signal: green technology is now packaged as something that could make a lot of money – ecological, quality-of-life and sustainability benefits are all relegated.

These are only a few examples of how society normalises the detrimental effects of the wealth aggregation fitness test. In the meantime, we continue to move strongly against harm caused by elements not attached to wealth accumulation, such as terrorism.

Once the effects of the fitness test are seen, they become evident all around us. Unfortunately, the cause has remained mostly hidden. It is possible the fitness test has evolved this characteristic.

“I concluded that the world was being shaped by an evolutionary fitness test of wealth aggregation.”

Originally, I argued the societal evolutionary fitness test from first principles. All systems having evolutionary prerequisites end up behaving according to evolution. This is so predictable that engineers use to it to design equipment because evolution finds unforeseen and, sometimes, incomprehensible solutions. The evolutionary prerequisites of wealth aggregation are clearly evident in global human society. However, I was informed that my argument had “no academic value whatsoever” and was pushed out of university.

I decided to use agent-based models to demonstrate it. Working as a warehouse labourer by day, I programmed at night. The model used a living population (agents had a set life-time, they would starve if they didn’t get enough food, and they would go extinct if they didn’t successfully reproduce). I gave my agents the ability to evolve whatever kind of behaviour they wished.

First, I had them economically organised as hunter/gatherers. Then I gave them the ability to trade using money. Then I gave them the ability to develop life-changing technology. As expected, the shape of the agent’s society was powerfully impacted when effects of the aggregation fitness test became empowered. The food supply went up. Starvation went up. Population growth became exponential. The results were published in the Journal of Artificial Societies and Social Simulation (Gooding 2014) 4.

My hope is that instead of using policy and law in attempts to mitigate the symptoms of the wealth aggregation fitness test, we will eventually use our ingenuity to tackle the cause itself.

Since the JASS article, I have been working on a doctorate in economics called Foundational Forces of Trade. Ever wonder how evolutionary forces are shaping prices? The answer was not what I expected and, hopefully, will soon be available to confound expectations in others.

Tim is keen to understand how emergent behaviour and evolutionary forces shape the market and society. One of his goals to bring complexity into economics and increase the understanding of … 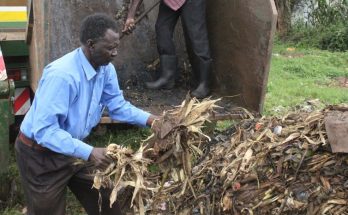 The community initiative creating sustainable employment, food security and energy out of waste

Walking in the footsteps of giants